This week’s “Motivational Monday” is focused on none other than Brad Pitt in his role as Tyler Durden. Yes, I realize it’s been quite a while since Fight Club came out (1999), but this movie has made such a large impact in the fitness industry and it is still seeing the ripple effects. I can’t imagine too many out there not motivated by the famous Brad Pitt Fight Club Workout and the amazing shape that he was in for this movie. 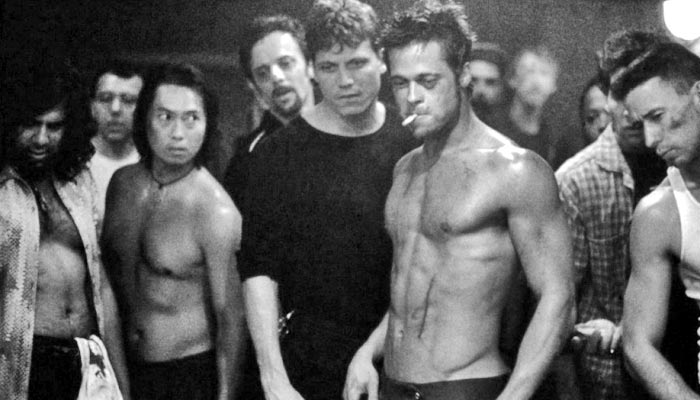 I really don’t want the focus of my blog to be towards celebrity workouts… I’m honestly not an authority on them nor do I think that they are “special” routines that will produce amazing results for everyone. There are, however aspects to some of them that will help you in your fitness training routines. Let’s look at Pitt’s workout for this film and see what takeaways we can incorporate.

Pitt used a semi-bodybuilding type workout. Normally I wouldn’t suggest this approach but you have to take into account the exceptional condition he has been in throughout his career. Not only has he always had a somewhat muscular physique, he’s also always been very lean. If you Google him, you will find most of his pictures have him looking lean & toned: Brad Pitt Workout Pictures

Tyler Durden’s Stats
Brad Pitt weighed about 155lbs′(he’s 6 ft. tall) in Fight Club and was at 5-6% body fat – pretty “small” but you can see how shedding fat will actually make you appear bigger and give you a much more impressive physique!

Pitt’s  workout was based on a training routine targeting only one muscle group per day. He did 3 sets of 15 reps per exercise and rested for 1 minute between sets. The amount of weight he used caused him to reach failure on his last rep but still be able to keep good form – training to failure isn’t something I usually endorse either. It is a great way to add size though!

After 4 straight days of resistance training, Pitt hit cardio to ensure that his body remained in a fat burning mode. Here is an overview of his Fight Club workout:

The Workout You Should Do To Get The “Brad Body” 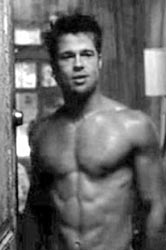 Sounds funny: “Don’t do Brad Pitt’s workout if you want to look like Brad Pitt in Fight Club.” I know, but hear me out…

The main reason he looks so good is because of his low body fat.

He really doesn’t have that amazing of a build (critically speaking, of course). If you look at his physique his chest isn’t spectacular, it’s ripped so it looks great, and his traps and lats aren’t off the charts either, also ripped so still looking great!

His best assets are his arms and shoulders. That is what makes him look a little bigger than he really is as far as muscle size.

Oh yeah, he’s also got some of the coolest abs ever!

If you want to achieve this look, you must be at a low body fat percentage. As was mentioned, Pitt is at about 5% – that is very low and very impressive. My guess is that the average “fit” guy is around 12% (women probably  around 25%) and would benefit greatly by dropping down to around 8% (20% for women) – that is when you are really going to start seeing the type of definition that will give you the Tyler Durden look.

Why Was Brad Pitt’s Workout So Effective?

Overall, I honestly wouldn’t recommend this style workout for everyone, but if you have worked your butt off to get lean or are already a lean person than this workout would be adequate. A far superior approach would be to follow Rusty Moore’s Visual Impact Muscle Building. You can read more about it and checkout my before and after pics here.

Adding Muscle to a Lean Body
What made this so effective for him was the fact that he was already down to such a low body fat percentage. If you are skinny, or very lean, that is the perfect time to build muscle. If you have a few pounds of fat to shed (or more than a few) I would recommend going on a diet to look like Brad Pitt first.

The diet that practically all of my fitness colleges, as well as myself, use to shed fat on demand is Eat Stop Eat. The main goal here is to find a diet that you can follow and maintain long enough to get ripped.

Once you have dieted down and maintained your new weight, your skin is going to be used to the small version of you. When you add bulk to your already tight skin you get the “shrink wrap effect.” This is the same method that Taylor Lautner used (by accident) when he got in such great shape for his role in Twilight and it is the reason the Brad Pitt Fight Club workout worked so well for Pitt. 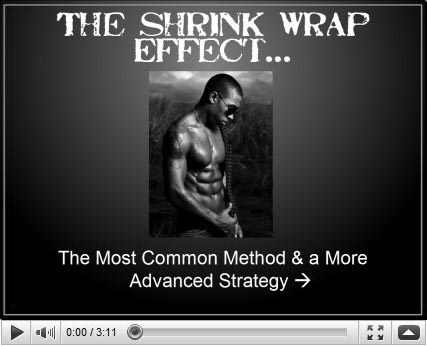 Click above to watch a short video (video #3) for a little more on the shrink wrap effect or you can checkout some of the other top celebrity workouts I’ve outlined like the Daniel Craig, Hugh Jackman and the Vin Diesel workouts.

I’ll leave you with one last quote from Tyler…

“Advertising has us chasing cars and clothes, working jobs we hate so we can buy “stuff” we don’t need. We’re the middle children of history, man. No purpose or place. We have no Great War. No Great Depression. Our great war is a spiritual war. Our great depression is our lives. We’ve all been raised on television to believe that one day we’d all be millionaires, and movie gods, and rock stars, but we won’t. We’re slowly learning that fact. And we’re very, very pissed off”

How To Get Pecs – Examining Upper Chest Exercises For A Full, Square And Masculine Upper Body Do Shape Ups Work? – Definitely Not A Miracle Walking Shoe, But Maybe The Right Amount Of Motivation!