How Much Muscle Can You Gain In A Month — For REAL

One of the first questions a beginning weight lifter may have is how much muscle can you gain in a month. Unfortunately for many, the answers given are completely over exaggerated and completely not true. What makes this worse is that you will see promotion after promotion promising “20 pounds of muscle in a month” or something similar. When in reality, a three or four pound gain of pure muscle would be incredible for a one month period.

So if you are a beginner and you aren’t gaining 20 pounds of muscle per month, do not give up on your training. Chances are that your expectations have not been set. 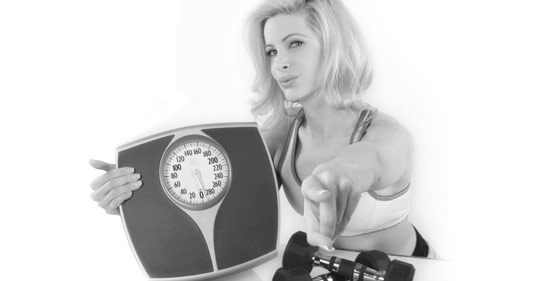 Here is probably the cheesiest picture I’ve ever used … love it! 🙂

Although 4 pounds of muscle doesn’t sound like much it really is … as long as it’s 4 pounds of muscle. In reality one pound of muscle is quite noticeable, especially when built in the shoulders, chest and arms. However, if someone told me that I had to gain 20 pounds of muscle or else, I would head to the squat rack and focus on my quads, butt and hamstrings. The only problem with this is that after seeing me a year later he probably wouldn’t believe me and would force me to jump on the scale.

Gaining muscle in your hips and thighs just doesn’t look impressive. However, if I was to gain 5 pounds of muscle purely in my shoulders, chest and arms, that same guy wouldn’t think twice about making me jump on the scale … he’d probably just believe me that I packed on 20 more pounds. (some of these numbers are exaggerated, but you get the idea)

How Much Muscle Can You Really Gain In A Month?

There really isn’t a one size fits all answer. We may have all be created equal but certainly not the same! Genetics do play a big part. Someone with a smaller frame is just not going to be able to pack on as much muscle as someone with a bigger frame. This really is a very important point too.

It would be pretty difficult for someone with a small frame to pack on as much muscle and bulk as Diesel. Likewise, If you take someone like Diesel or Duane Johnson and try to fit them into a physique like Brad’s famous Fight Club look it’s probably not going to be the best look for them.

The point is that you need to be realistic with your genetics, where you are at and where you want to be.

Having said all of that though 🙂 most of the research does say that you can gain 2 pounds of muscle in a month. So a 1/2 pound muscle gain per week is really a good number to shoot for.

If you are a beginner it isn’t totally uncommon to see up to a 1 pound per week gain, but don’t get too excited, that will slow down once you approach your body’s full potential.

Although this doesn’t sound like much, it would definitely be noticeable. On top of that, this is 2 pounds of muscle, not 2 pounds of everything. With a 2 pound gain of muscle you will no doubt tip the scales with a larger overall gain. You have to remember that you will add water weight, bone weight and yes, fat weight.

Another important aspect to remember is that when you are working out to gain muscle you are no doubt lifting and eating in a way that will cause your muscles to retain more glycogen. This alone will not only make you weigh more, but it will make you look bigger and fuller … giving the appearance of a larger weight gain.

What About All Those 20 Pound Gains?

Yes, there are quite a few 10 to 20 pound “muscle” gains broadcasted around the net and in all the fitness magazines. Even with all of the legit (and natural/non-juiced) 10 or 20 pound gains though, those were not gains in pure muscle.

I’m not saying that is a bad thing either. If a guy does happen to gain 20 pounds in a month, he could still look as lean as he did before … making you think that he gained pure muscle.

As I mentioned before though, with an increase in diet (usually carbs are upped as well) the muscle stores more glycogen.

All of this can be quite misleading!

So you gained 20 pounds, your body fat percentage has not gone up, your muscles are fuller and bigger … you must have gained 20 pounds of muscle, right? Not quite, let’s look at this closer.

So how much muscle can you gain in a month … for real? As mentioned already, a good number to shoot for is 2 pounds (of muscle) per month. As you increase your diet and up the volume of lifts just keep an eye on the scale and the mirror. Monitor your fat levels and add/decrease calories and food consumption as needed.

How Much Total Muscle Gain You Gain (Naturally)?

So in theory, if you train right and eat right you can gain 2 pounds of muscle without ever stopping? Unfortunately, no … at least not without steroids, HGH and/or other illegal and unsafe drugs. In reality, this is an entirely different subject. In fact, Casey Butt, PH.D. even has an entire book on determining the muscular potential. If that’s something you’re interested in reading about you can checkout some excerpts from his book here.

In short though, there really are several different theories and formulas on how to determine one’s maximum muscular limits. The most studied (and tested) formula out there is the Frame Model Size.

“Based on an analysis of some 300 class and overall title winning drug-free bodybuilders and strength athletes from 1947 to 2010 … predicting the maximum lean body mass … describes a “normal” state of nutrition and fluid retention …” – Casey Butt, PH.D.

To save us from doing the math, Casey Butt, PH.D. put together a calculator to do it for us 🙂 Here is a link to the calculator.

So with this formula, a man with the following measurements can hope (not expect, because this is the potential/maximum limit) to weigh 201.7 pounds at 8% body fat.

After following the equation above to arrive at the maximum lean body mass, you would then need to follow this equation to reach the final weight:

… or just use the calculator!

NOTE: Again, there are quite a few other formulas out there. Also, this formula was based on studies done on some of most the elite natural bodybuilders in the world. I personally wouldn’t count on reaching the exact numbers given. Most likely these are some of the genetically gifted.

Also, for most of us, we don’t really need to concentrate on the maximum potential that our bodies could reach … this takes decades of solid training and eating to reach. I just wanted to outline a fairly solid model and set expectations a bit.

So, how much muscle can you gain in a month? About 2 pounds a month is what you should shoot for. Beginners could experience better gains while the more experienced won’t be able to continually pack on 2 pounds a month of solid muscle.