What is the best way to lose weight? Ask just about anyone and you will get the same answers. Eat healthy. Eat clean. No carbs.

The good news? At least these answers are touching on the right subject – diet.

The bad news? It’s possible to follow all of this advice and still not lose weight.

While the answer to “eat healthy” to lose weight sounds good (it actually is), in the end, losing weight is less related to what you eat and more to how much you eat. You can eat the cleanest diet around but if you overeat you are simply not going to lose weight. 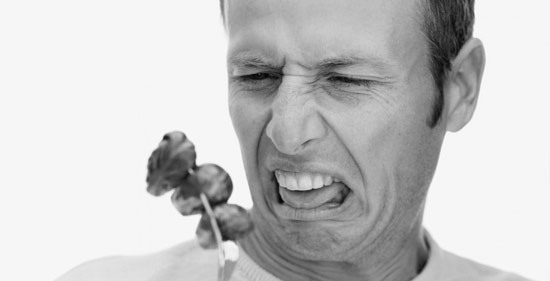 Do you like brussel sprouts? I actually love ’em. My wife … hate’s ’em! I think this guys is undecided.

It’s quite basic – eat less calories to lose weight. We’ve all heard it over an over again. However … we’ve also heard that you need to eat clean, you need to eat six times per day and that you shouldn’t even consider touching a carb. In short, not everything we hear is correct.

Eating more often does not help you lose more weight. It doesn’t boost your metabolism. I’m not saying that you shouldn’t eat often either … just saying that eating often, in itself, will not make you lose weight.

Also, carbs are not the enemy. Too many carbs are bad. But eating some carbs is okay good.

Yes, your diet is the most important factor in losing weight. But where most get it wrong is that they focus on what instead of the how much. Oops, I think I said that already, huh.

Over the past month or so I’ve been busy. Really, really busy. Nothing out of this world. Day-to-day stuff really.

Because I’ve had very little time to get to the gym, or to even get in a good workout at home. Like two workouts per week. Now, I’m not currently trying to lose weight (or add muscle) but I do like to keep fit. That’s where diet plays such crucial role.

In order to be lean you’ve got to have your diet in check.

For me, I actually do like “clean” foods – eggs, chicken, fish, veggies etc. I also, like unclean foods – pizza, nachos, beer etc. This is where dieting can get tricky.

My answer to maintaining a fit physique without spending too much time in the gym … while eating clean and unclean food? Diet. And not just any type of diet, the Eat Stop Eat diet.

Now I’ve written about the Eat Stop Eat diet in the past. I even go as far as to list it as my most recommended diet. It’s by far my go-to diet. It’s good. It’s scientific and it works.

The author is not going to tell you that you  cannot eat carbs or foods you love. That’s not realistic and if you do that it’s only a matter of time before you revert … and probably end up worse than when you started.

Instead, Eat Stop Eat is all about eating less. Okay, so there’s more to it than just calories. It’s actually full of scientific research and references. The book is actually fairly deep but the implementation of the diet is quite simple. That’s another one of the reasons I like it so much. It’s simple.

Who likes dieting? Probably not you. I don’t really like it. But in order to lose weight or to maintain a lean and muscular physique dieting is a must. You cannot skip it. Not completely anyway.

Instead of forcing yourself to eat raw veggies, blan chicken breasts and water mixed protein shakes around the clock, try just eating … less.

Now I know, low calorie diets get a bad wrap. They aren’t popular. Not even close.

Large companies aren’t going to advertise eating less of their foods. That would be stupid. They would make less money.

Instead, they come out with whole grain foods, organic foods, lean cuts of meat, etc. Again, don’t get me wrong – these are all good. All of them. I like to eat organic, lean and whole foods as much as possible.

My point is that instead of teaching ones to simply eat less, they’re saying to eat more, but just make sure to eat “healthy.”

Don’t fall into this trap.

But it’s not really even about the muffin.

It’s the calories. Your caloric intake is really what it’s all about. If you like whole grain muffins, well, go ahead. They aren’t a diet food. Not by any means. But if you really like ’em … go for it.

You’re main concern should be to simply reduce calories.

Now I’ve talked about weekly calories before so I’m not going to go into detail. Just remember to focus on your weekly calories instead of daily calories you’ll be better off. You’ll be able to enjoy some of your favorite foods. You’ll also feel less restricted.

Now a word of caution. The non-typical dieting approach of Eat Stop Eat takes self discipline. The Eat Stop Eat lifestyle is not an excuse to go crazy on one day and then to not eat on another. That would be silly. That wouldn’t work long term. Probably not even short term.

Instead, Eat Stop Eat is a smart, scientific and healthy way of decreasing your weekly calories so that you can lose or maintain weight without stressing about the exact macronutrients and size of each and every meal.

NOTE: Following Eat Stop Eat is not what’s important. That’s just one way to eat less. If you don’t want to spend the money on it then don’t. I think I paid $67 for it over a year ago but you can now pick it up now for much less.

Also, if you’re not into intermittent fasting that doesn’t mean that you can’t adopt some of the principles. Try decreasing the amount of food you eat a couple times per week. This will allow you to eat more on others.

Also, you don’t have to meat an exact caloric intake every single day in order to lose weight. Just meet your caloric requirements for the week and you’ll be set.

Working Out But Not Losing Weight – Don’t Give Up Just Yet!