Is starvation mode myth or fact? In a word: fact. In more than a word: fact, but you don’t need to be overly concerned with it.

Most of us do not need to think twice about starvation mode. Yes, there are some who would like us to believe that if we are not stuffing our faces with something every 3 hours that we are going to lose all of our hard earned muscle. Or worse yet, that we will be unhealthy. 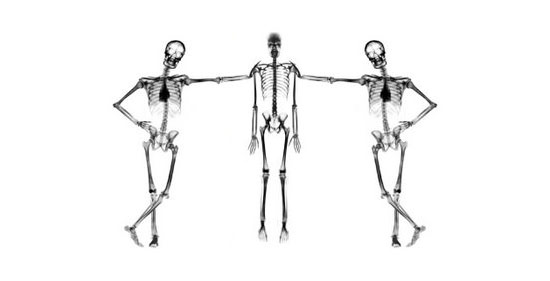 “Ahh, look at Bones, he skipped breakfast last week. Now look at him … no more muscle.” – Skeleton on left says to skeleton on right.

Perhaps the none stop warnings about meal frequency, slowing down your metabolism and not getting enough calories has something to do with why American’s are generally overweight.

Anyway, last week I posted an article about how to do Eat Stop Eat and let my Google+ followers know it was there.

What surprised me was not that there were a few who had not heard of Eat Stop Eat, or that not everyone liked following it themselves … no, it’s not for everyone. What did surprise me was that there are apparently those out there who are still overly worried about starvation mode. Don’t get me wrong, I am not saying that starvation mode does not exist. It does exist.

In this article I’d like to talk a little about what starvation mode actually is and when it occurs.

What Is Starvation Mode?

Starvation mode, as is generally referred to, is the shutting down or crashing of one’s metabolism. This is often said to happen from having too little protein, too little calories or even from missing a meal. It is also said that your weight loss will plateau and you will not be able to lose fat because your body is starving and needs to hold on to anything it can. Some even say that you begin to gain weight as a result of your “ruined” metabolism.

So what exactly is starvation mode?

“… Starvation mode is a state in which the body is responding to prolonged periods of low caloric intake levels. During short periods of caloric abstinence, the human body will burn primarily free fatty acids from body fat stores …” – Wikipedia’s definition of Starvation Mode

Why Some Feel They Are In Starvation Mode

Many people who experience what they think is starvation mode are just having a hard time losing what is commonly referred to as stubborn fat. It’s the last 5 pounds (sometimes 10) that take a while to lose.

The more fat you have, the more your body is able to oxidize it and the faster you lose it. If you are losing 10, 8 and 5 pounds every few weeks or in a month and then “suddenly” you only lose 1 pound in 2 weeks that does not mean your metabolism is shutting down.

Even some of the fitness industry’s leaders who at one time really pushed the subject of starvation mode are no longer putting as much emphasis on it, or are at least making sure to not scare their readers.

“As a result of these myths, I have even clarified and refined my own messages about starvation mode … because I don’t want to see people panic merely because they miss a meal or they’re using an aggressive caloric deficit at times. I find that people tend to worry about this far too much.” – Tom Venuto

Real starvation occurs after extended periods of time (weeks or months) of eating less than the body requires to function per day.

Your body does not go into starvation mode until it’s fat reserves are completely exhausted and protein is the only fuel source left. This takes place quicker in a leaner person since the fat reserves are depleted quicker. Generally, this should not even be a concern until you are at 5% body fat, for a man, or 10% body fat for a woman.

If you go on a low calorie diet to lose weight don’t buy into the hype that your body is going to shut down. It’s not.

Now, I’m not telling you to go on a VLCD (very low calorie diet) for extended periods of time. That is not healthy either. I’m also not endorsing crash diets as I find them to be only a short term solution. I doubt that they will “ruin” your metabolism, but if they are too restrictive you are bound to overindulge once you are “off your diet.”

Yes, I realize that there is A LOT more to the starvation mode and what occurs. I just wanted to briefly touch upon the fact that you can eat low calories for short periods of time without causing your metabolism to crash. You can skip a meal and not have to worry about your metabolism slowing down. If you want to lose weight; eat less.

NOTE: I am not a doctor. Please consult your doctor prior to any diet or exercise program.