Over 40 And Still Want To Exercise? Good!

While the United States has been considered the most obese nation in the world for several years running, recent studies have claimed this honor for Mexico. Statistics show that nearly 35 percent of the entire Mexican population is overweight and although this may be cause for some in the United States to celebrate, it is certainly nothing to be happy about. The U.S. is still second in line as the most unhealthy and overweight nation in the world due to overeating and lack of exercise. 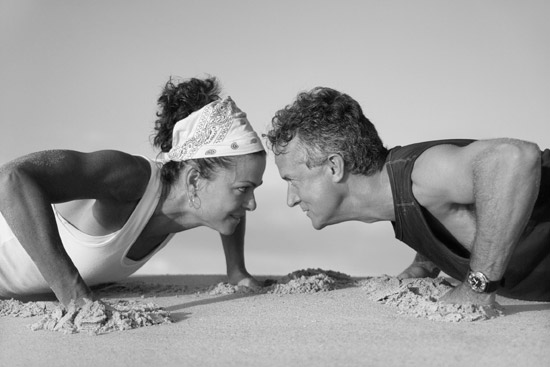 This has led many to begin exercise programs in order to lower their weight and live healthier lifestyles. Many of the over 40 crowd have begun to get very serious about their health, which is certainly not a bad thing. Exercising is essential to healthy living.

People who are overweight are at a much higher risk for developing heart disease, diabetes, stroke and a number of other serious health conditions. Obesity itself can bring with it many serious health issues and can debilitate someone both physically as well as mentally.

The good news is that many people in their 40s and over have begun to realize the effects of long term indulgent eating and sedentary lifestyles. Many health programs are geared toward the middle-aged crowd and there are a host of products on the market that are designed to help people eat right and get in some exercise every day.

Being active does not necessarily mean running a marathon every day. In fact, just a few minutes of movement each day can have a significant effect on the human body. Studies have shown that getting just a half an hour of moderate exercise just five days each week can help people to stay fit and live healthier. Exercise can be simple things like taking a walk, mowing the lawn, doing a bit of housework or anything that prompts movement. Doing just this little bit of exercise can decrease the risk of diabetes as well as many other serious health conditions by up to 40 percent.

Research by the American College of Sports Medicine states that strength training can be an effective form of exercise for people of all ages.

“The benefits of high-intensity training have been known for a while, experts tell us. But in our busy lives, new research on shorter and shorter workouts continues to tantalize, especially when compared with the 150 weekly minutes of exercise recommended by the ACSM.” – Dallas News

Getting active is essential, particularly for those who are growing older. In order to ward off many chronic illnesses that come along with age, exercise is a must. Those who are not currently exercising should begin to get in some form of movement every day.

There are many ways to get this movement in and a bit of fine-tuning of a daily schedule will allow for at least a half an hour each day for walking or some other form of cardio. In fact, most people can rise a half an hour earlier every morning and have plenty of time for a brisk walk before going about their daily routine. This is just what many people have begun doing.

Running on an empty stomach will actually help to burn more calories and exercise is a great appetite suppressant. Exercising before breakfast helps to burn more fat, up to 20 percent more in fact than waiting until after eating in the mornings. A study published in the British Journal of Nutrition shows that people can burn much more fat, suppress their appetites so that they eat less and generally feel better all day long when they begin the day with exercise.

“Women burn more fat during exercise, so it’s possible they could see an even greater fat-burning benefit by working out before breakfast.” When you exercise on an empty stomach, your body burns more stored fat than carbs to give you the energy you need.” – Huffington Post

Exercise however, is not just for the over 40 crowd. Those who begin getting in shape and staying that way at an early age are much less likely to see their bodies change in a negative way as they do age. Exercise is fundamental in keeping vital organs not to mention bones, muscles and other major body functions operational. Eating right is essential in keeping a healthy weight but exercise goes much further than just seeing good results on the scale. Exercise is about promoting an all over healthy body. Even those who are not considered overweight should enlist some sort of exercise program in order to keep their bodies healthy.

Vitamin D is an essential part of keeping healthy as well. This vitamin promotes good bone health which is important for those over 40, particularly women who are going through or have gone through menopause. Vitamin D helps to keep bones from becoming brittle. It is recommended that a vitamin D supplement be taken every day by men and women alike and the supplement should be taken around lunch time when blood serum levels are at their best.

Finally, keeping blood pressure levels steady and healthy is optimal for good health and exercise is great for keeping blood pressure down. Those who take time to exercise are happier, healthier and much more fit than those who do not. Studies have extensively shown that people in their 40s and over can benefit from some form of exercise program every day. Simply walking to the mailbox is movement enough for some but the fact remains that getting a little exercise is essential for those who are growing older. Many studies have shown that the healthier the body in general, the less risk for diseases such as Alzheimer’s and others. This is in addition to the heart benefits and other advantages to exercising on a regular basis. Exercising now before serious health complications arise is essential and a decision that everyone should make.