When creatine was first released, it was seen as an almost miracle-product that would help bodybuilders get massive in no time at all. It did, indeed, work on some, but others noticed that they weren’t actually gaining any muscle mass. As a result, a comprehensive scientific study took place to see what was happening when people use creatine.

“A recent study found that when creatine is mixed with liquid (or travels through your digestive system), it rapidly converts into “creatinine” – a toxic by-product of creatine. […] It’s almost always absorbed poorly by the body – and its effectiveness depends on the cells ability to absorb it. The poor absorption rate requires you to ingest massive dosages to achieve the desired effect. Because creatine draws water to the cell and a majority of the ingested creatine monohydrate is not absorbed… it sits outside the target cell with the extra water causing the infamous “creatine bloat.” – AS Research 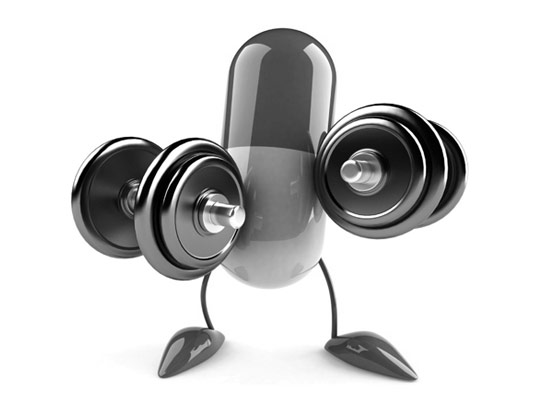 It is largely due to the bloating side effect that some experience that using creatine while cutting was initially called into question. To be honest, there are valid points to both sides of the argument – to take or not to take creatine while trying to cut fat. For the last 6 weeks I’ve been trying it out myself. So far – I am a fan!

But to be fair, I’m not taking just any type of creatine. I found a great Kre-Alkalyn based creatine and this type has been shown not to cause “the bloat” that some other forms cause. Also, I am not planning on competing in any contests anytime soon. When it comes to looking your absolute leanest and “driest” as possible, sure, creatine might not be the best way to go.

For me and probably many others though, the benefits of taking creatine while cutting outweigh the negatives.

Should You Use Creatine While Cutting?

Whether or not you should use creatine while cutting seems to have become a truly personal choice. Various users suggest that you should take more creatine one week and less the next, then alternate in that manner. Other users say it depends entirely on understanding the pros and cons of the product itself.

“Creatine helps with power output right? If you are benching heavy weight, it can help you squeeze out that last rep. When you are cutting, you generally lift lighter weight in higher volume*, the effects of creatine might not always be necessary (this really depends on how you train).” – Fitness.com Forum

Add to this that it is common for people to have some water retention after taking creatine, which can create a very undesirable, soft look, quite a few people avoid it as much as possible.

*Please note that the old-school approach of lifting lighter weights at a higher volume is far from what I consider ideal.

What a lot of people now feel is that there is nothing wrong with taking creatine while cutting, but to not take it all of the time. Mainly due to the issue of water retention, it can be very difficult to accurately work out what your fat free mass is. Hence, it is recommended to cycle off every once in a while too.

“It is an energy-supply supplement, not an anabolic supplement, and so your muscles will feel the benefit of creatine supplementation when cutting too, especially as they will be finding it harder to get the energy due to a calorie-restricted diet. […] Creatine can cause some water-retention, and so to get an accurate picture of your correct fat-free mass, it might be useful to cut it out for a few weeks as well to allow water to disperse and then take weight measurements. This is also an idea if for whatever reason you want to look more defined: if you cycle off creatine for a while, the loss of water will help make muscles look more angular and create the visual illusion of less fat.” – Muscle and Strength

Avoiding the bloat is obviously very important. Not only is it unsightly, it throws off measurements and it is uncomfortable. However, the bloat has been hyped up slightly and many people think it isn’t actually as bad as they will have us believe.

“… high creatine will retain water in your muscle cells because it needs to replace the atp’s you lose after training the more creatine the better repair, just make sure load up correctly and maintain your water levels for your height I’d say 6 pints a day min!” – Bodybuilding.com Forum

It’s all about taking in more water if you take in more sodium. The reality is that high levels of creatinine, caused by poor absorption of creatine, simply means that the body is dehydrated.

“It appears that you may have dehydrated causing hypernatremic (hypertonic) dehydration. This occurs when the lost fluid contains less sodium than the blood (loss of hypotonic fluid). Relatively less sodium than water is lost.” – HealthTap

If this happens, the brain is tricked into believing that there is no more water available for the foreseeable future. Essentially, it goes into starvation mode, but specifically for fluids. This is what causes the bloating, because your body is doing everything it can to hold on to those precious last drops of water. In order to make sure this doesn’t happen, you have to drink sufficient amounts of water.

The alternative is one what many are doing – choosing a Kre-Alkalyn supplement (like Hyper Gain) instead.

The Kre-Alkalyn supplement that I have been taking and can easily recommend is ASR’s Hyper Gain. If you’re interested in it, you can check it out by clicking the link above.

The Theme of This Health And Fitness Blog – To Show You How To Get Toned, Lean & In Truly Great Shape